Also called nuad bo rarn, traditional Thai massage has been taught and practiced in Thailand for approximately 2,500 years. It is an ancient therapy (probably as ancient as yoga practice) rooted in the Indian tradition of yoga combined with Buddhist spiritual practices.

Dr Shivago Kumar Bhaccha (personal physician of the Buddha and Magadha king) brought the knowledge from North India to Thailand around 2,500 years ago where it is still practised close to its original form – whereas in India it evolved into Ayurvedic massage. Historically, manipulation was one of four major branches composing traditional Thai ceremonies or magical practices.

Like yoga, traditional Thai massage is based on the concept of a human being consisting of more than just their physical body. According to Indian yoga tradition, we are made up of five different bodies; the physical body, the prana or energy body, the memory body, the subconscious body and the cosmic body within which all the bodies are connected. 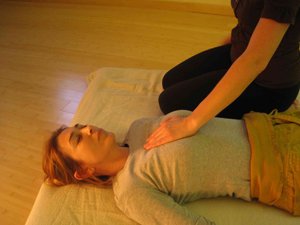 Thai massage works primarily on the prana or energy body using acupressure techniques along ‘Sen’ or energy pathways. Traditional Thai massage theory holds that the body is made up of seventy-two thousand ‘Sen’, or energy lines, of which ten hold top priority. Using physical pressure and manipulation, the healer evaluates and modulates the flow of vital life energy (known as chi, ki, prana, or qi) to attain a state of balance.

Thai massage is practiced on a firm mat on the floor instead of on a table, so the practitioner can use their body weight effectively. The practitioner may use their hands, elbows, knees, and feet to exert pressure; gently rock the client’s body or specific body parts; and lead the client in deep stretching and mindfulness techniques. The goal is to create energetic balance and wholeness of mind, body, and spirit in both the client and the practitioner. Except for the feet, the client remains fully clothed.

Thai massage has been described as ‘lazy man’s yoga’; it is relaxing, invigorating and releases energy blocks within the body. Thai yoga massage is regular workout in itself, but also works well with other complementary therapies, and a regular yoga practice.